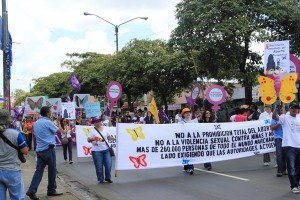 Wife beaters are bullies – cowards who target victims who can’t fight back on the assumption that nobody else will stand up for them. The Nicaraguan government must stand up for victims of gender-based violence by punishing the criminals who harm them.

While defending Law 779 is very important, Tracy Robinson of the Inter-Americna Commission recognized that the Nicaraguan government needs to do much more to protect women’s rights. Nicaragua is one of a handful of countries that bans abortion under all circumstances, including the woman’s health. Right now, the danger of such a law is being clearly demonstrated in nearby El Salvador, where the government refuses to allow 22-year-old Beatriz’s doctors to provide the treatment they say is necessary to save her life.

3 thoughts on “What Would You Tell a Victim of Domestic Violence?”