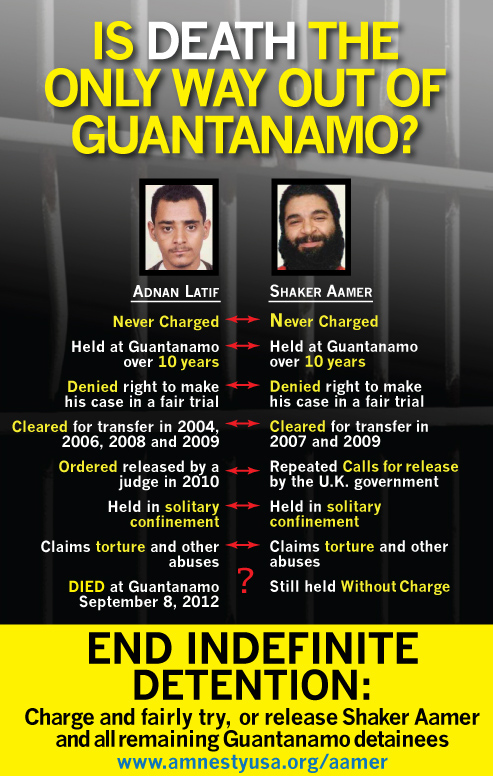 Nearly four years ago, on his second day in office, President Obama ordered the Guantanamo prison closed within one year.  Today it remains open, with 166 detainees, and human rights violations in the name of “global war” have become the “new normal” there, at Bagram in Afghanistan and elsewhere, including indefinite detention, unfair trials, unlawful killings with drones and impunity for torture.

President Obama must make good on his promise to close the prison, and he must end–and ensure accountability for–human rights violations in the name of “global war.” Yes, there are obstacles to closure and reform–however, if President Obama were to change course and honor the U.S. government’s international human rights obligations, the path forward is clear, because human rights provide a framework that protect and ensure justice for all of us.

Here are 10 concrete steps–by no means exhaustive–President Obama can take now and in the near future to keep his promise and help make his rhetoric on human rights a reality:

1) Immediately recommit publicly to closing Guantanamo, recognize that international law applies to all U.S. counterterrorism operations, and recognize that the right way to close Guantanamo is to ensure that detainees are either charged and fairly prosecuted in federal court, or released to countries that will respect their human rights.

2) Immediately release Guantanamo detainee Shaker Aamer to the United Kingdom unless he is to be charged with a crime and prosecuted fairly in federal court. He’s on the Obama administration’s list of 55 detainees publicly cleared for transfer out of the prison; the U.K. government has repeatedly called for Shaker Aamer to be released to his wife and children in London; and the U.K. appears to meet the Congressional certification requirements in the 2012 National Defense Authorization Act to transfer him there (see Section 1028 of the NDAA).

3) Take urgent steps to work with suitable countries to release the other detainees on the Administration’s list of 55 Guantanamo detainees who are publicly cleared for transfer out of the prison, including the three remaining Uighurs, unless they are to be charged and fairly prosecuted in federal court.

4) Work with Congress to ensure that the transfer restrictions in the 2012 National Defense Authorization Act are not renewed next year. The restrictions purport to bar transfers to the U.S. for any reason, whether for trial or resettlement, and put impediments on transfers to other countries.

5) Abandon the unfair Guantanamo military commissions. Any Guantanamo detainees the government intends to prosecute should be tried fairly in U.S. federal court, without recourse to the death penalty.

6) End indefinite detention. Ensure that all detainees are either charged and fairly tried in U.S. federal court, or are released to countries that will respect their human rights.

8) Work with Congress next year to repeal the detention provisions in the 2012 NDAA and repeal the 2009 Military Commissions Act.

9) Withdraw the Authorization for Use of Military Force that has been used to justify human rights violations such as indefinite detention and unlawful drone killings in the name of “global war.”

10) Ensure accountability for torture, unlawful killings and other human rights      violations as required by law, including full investigation, prosecutions where warranted, and ensure remedy and redress for victims.

And for people like Shaker Aamer and others who have never been charged with any crime but remain unlawfully detained, it is an urgent matter of life or death.

16 thoughts on “President Obama: Keep Your Promise to Close Guantanamo”