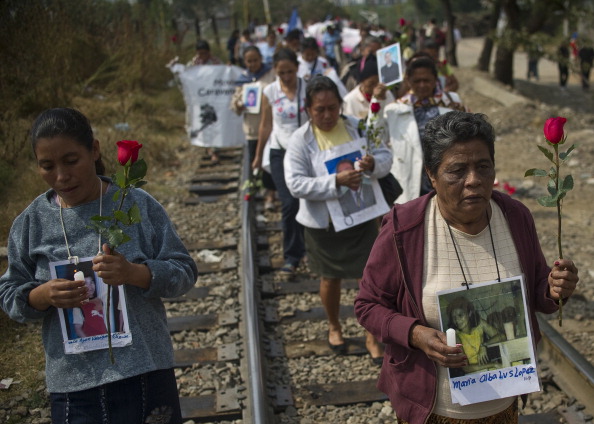 A group of 33 Central American women traveling in a caravan across Mexico in search of migrant relatives (Photo Credit: Ronaldo Schemidt/AFP/Getty Images).

The scrub-lands and desert in Mexico’s northern state of Coahuila are the last stop for Central American migrants before attempting to cross the border into the USA.

By the time they reach Saltillo, Coahuila’s capital, they have made a perilous journey of nearly 2,000 kilometers. Along the way, many of these men, women and children suffer assaults, robbery and abduction by criminal gangs. There are also reports of extortion and ill-treatment by police and immigration officials. Tragically, some migrants are killed before they even get this far.

There are no accurate estimates of the numbers of migrants who enter Mexico from Central America in this way without documents.

Authorities apprehended 85,000 migrants, mostly Central Americans, in 2012. Meanwhile Mexican government statistics put the total number at 150,000 per year, but civil society organizations suggest that the true number is closer to 400,000 every year.

Unless Mexico lives up to its obligations to migrants, it risks being dismissed as self-serving when it asks for better treatment of its own citizens who travel to the USA without documents.

”
Jhonny, 24, is one of the many Central Americans who has transited through Mexico on his way to the USA, where he is hoping to find a better life. He left his home in Honduras three months ago to escape the rampant violence in that country. Along the way he met Rosa, who was making the same journey with her two young children.

They rode trains together from Caiaphas, on the Guatemalan border, to Veracruz, about 900 kilometers to the north, on the Gulf coast in central Mexico. Their journey was hazardous. They chose places along the tracks where the trains were moving slowly so that they could scramble onto the boxcars without losing hold and falling under the wheels. Once they were all clinging to the sides of the train, Jhonny would scale the ladder to the roof of the boxcar first, and Rosa would hand the children up to him before climbing up herself.

The dangers increased as they drew closer to Veracruz. At certain stations, gangs boarded the trains and demanded a “toll.”

“The rate was $100 per station,” Jhonny told me and my colleagues at Amnesty International. “They threatened us. They said they would hold us until we could call a relative to arrange to pay. If you couldn’t pay, they would throw you off the roof.”

Jhonny managed to hide inside an empty boxcar and then get off the train, but he was separated from Rosa and the children in the process. Jhonny has not seen the family since, and he is frightened that they were not as lucky as he was.

As many as 20,000 migrants are kidnapped every year in situations like this. The abductions can be lucrative: they earn criminal gangs an estimated $50 million each year, according to the Mexican National Human Rights Commission. 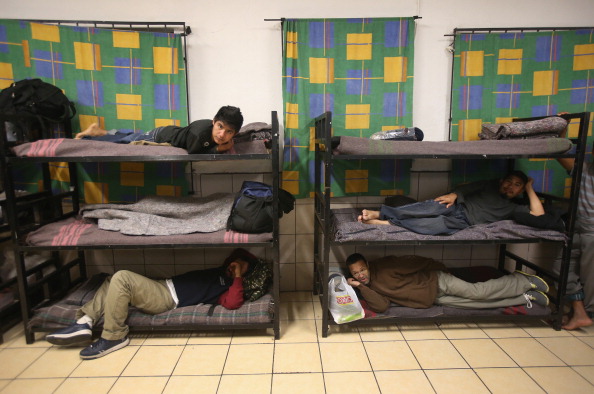 Nor are criminal gangs the only source of abuse. After he decided that riding the rails was too perilous, Jhonny traveled by bus from Veracruz to Saltillo. Outside San Luís Potosí, two men and a woman boarded the bus and demanded identification documents from everyone.

“There were three of us who didn’t have papers. The agents started shouting at us, ‘Quickly, quickly, take off your shoes, empty your pockets. You need to give us 500 pesos. If you don’t pay, we’re taking you to Immigration.’ They searched me and lifted up the inside soles of my shoes to see if I had any money hidden there. They took all the money I had and my shoes besides,” he said.

Jhonny referred to the three as police, but he doesn’t know for sure-they weren’t in uniform, and they didn’t identify themselves or show badges. But his account is consistent with reports from local human rights groups, which have documented a pattern of extortion of migrants by federal and municipal police as well as by immigration officials.

“In spite of all the hardships we left, the real nightmare is the journey through Mexico,” Jhonny concluded.

Mexico rightly raises the mistreatment of its own citizens by immigration and law enforcement officials in the USA. It needs to heed its own advice when it comes to ensuring the safety and human dignity of the migrants and refugees that cross its own borders. 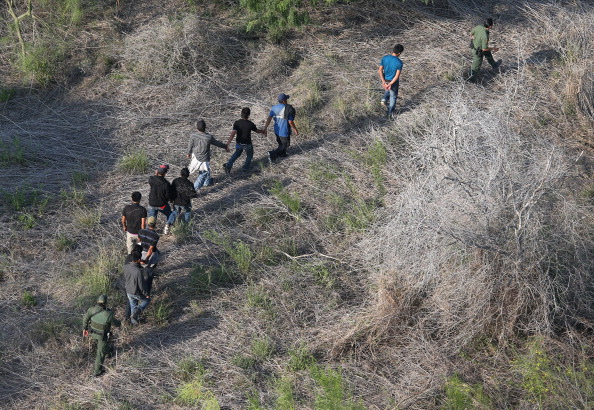 State and federal officials should start with the obvious. For one thing, they can step up policing to improve public security in and around areas where migrants are known to be targeted for kidnapping, extortion, and physical abuse.

“They need to improve security in the train stations,” suggested Oscar, another young Honduran man I spoke with at the shelter.

For another, they need to investigate and prosecute members of criminal gangs and public officials responsible for abuses against migrants. That’s a harder task given the levels of indifference, neglect, and outright hostility many state officials have shown toward human rights victims of any kind.

Unless Mexico lives up to its obligations to migrants, it risks being dismissed as self-serving when it asks for better treatment of its own citizens who travel to the USA without documents. It is fueling distrust among migrants and citizens alike, who view the state with a combination of cynicism and resignation. They expect official corruption and complicity as a matter of routine.

The continued failure to uphold basic principles of human dignity and protection from violence is a stain on Mexico’s record. It is to nobody’s benefit except the criminals who seek to profit from human suffering.

4 thoughts on “Most Dangerous Journey: What Central American Migrants Face When They Try to Cross the Border”