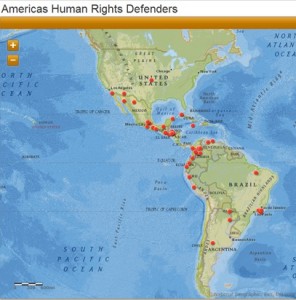 What is the Inter-American Commission on Human Rights?

The IACHR was created collectively by states in 1959 and is comprised of experts who act in their personal capacity yet are nominated and elected by states. It draws power and clout primarily because of its expertise, impartiality and autonomy. According to many human rights defenders, victims of abuse, and their families whom I have met throughout the Americas, this body serves a vital role in securing justice and accountability throughout our own hemisphere, stepping in when states are unable or unwilling to do so. And justice and accountability is exactly why Antonio turned to the IACHR; however, he was unable to take part in hearings because he was shot and killed.

You can explore more human rights cases – such as Antonio Trejo Cabrera’s – that Amnesty has documented over the past few years in the embedded interactive map. This provides just a snapshot of the countless human rights defenders throughout the Americas, many of whom have turned to the Inter-American Commission for the promotion, defense and protection of their or other people’s human rights. And it is these people, and so many others, who states participating in the OAS Special Session must remember tomorrow: these people are why you are there.

These defenders, and the activists and people they work tirelessly on behalf of, are one of the primary reasons why Amnesty International has welcomed the opportunity to provide input on the reform process to the Commission as a member of civil society, with the goal of strengthening the Inter-American System of Human Rights.

But the Inter-American Commission is currently under attack.

Over the past two years, however, the Inter-American Commission has suffered relentless attacks from states who, in part, resent the independent monitoring function of the IACHR – which, like other human rights watchdogs – exposes repression, injustice and demands accountability. Perhaps ironically, some of the states speaking out against the Commission have restricted freedom of expression in their own countries and, for example, are attempting to eliminate funding for the position of Special Rapporteur for Freedom of Expression.

These attacks are affecting the normal functioning of the IACHR and have the potential to affect the enjoyment of human rights by every single person in our hemisphere. These attacks must cease immediately.

This past Tuesday, after an extensive two year consultation with States, civil society, academics, victims, and their families, the IACHR approved reforms to its Rules of Procedures, Policies and Practices which, if effectively implemented, would strengthen the Commission while maintaining its autonomy and impartiality. These reforms are what should be taken note of and welcomed on Friday by Member-States of the OAS.

Will states stand up for human rights tomorrow?

Tomorrow, during the Forty-Fourth Special Session of the General Assembly of the OAS, states have an opportunity to reflect upon the collective human rights impact the IACHR has had over the past five decades, and take the following three actions which would strengthen, not destroy, the Inter-American System:

Amnesty International will be observing the OAS Special Session on Friday, along with many other civil society partners, and in solidarity with people across the Americas – such as Antonio Trejo – who rely on the Inter-American System for their human rights protection.

And we have one message for all states participating in the OAS special session: please strengthen, don’t destroy, the Inter-American Commission on Human Rights.