When you watch the Olympics this week, you will see plenty of Postcard Rio in between events. You’ll see the stunning natural beauty of the mountains that shoot dramatically up from the sugar sands of the coast. You’ll see people strolling the tiled seaside sidewalks in Copacabana. You’ll see shots of carefree Cariocas – residents of Rio – dancing to samba music or perusing colorful marketplaces.

Were those postcard camera views to pan out just a bit more, you would see a fence dividing the tennis and aquatics complexes from what looks like a weedy patch of ground on a lagoon dotted with a few homes – some intact, some gouged apart by bulldozers. The gleaming Olympic media center literally throws a shadow over the area. Welcome to the once-thriving community of Vila Autodrómo.

Vila Autódromo at one point was a favela of 600 families, many of whom worked fishing the lagoon. Though, like many favelas, it is technically a squatters space, over decades the community built and maintained the infrastructure to support generations of residents. It had electricity. It had plumbing. It had a supermarket. And it was pretty much left alone.

Until the Olympics came calling.

The Olympics were meant to be an exclamation point on Brazil’s economic and political ascendancy. It has not turned out that way. Rio, lately, has been having a tough time of it. Political turmoil, polluted waters, and the Zika virus, have piled on to the extant problems of deep economic divides between the wealthy neighborhoods by the coast and the hillside favelas, and a surge in killings by military police forces (some of which feature violent imagery of a skull impaled on a knife as their official insignia). It’s becoming clear that the 2014 World Cup, also meant to showcase the country’s success, proved to be a grim dress rehearsal for the Olympics, with favelas occupied by military police to aggressively quell any violence, with devastating results for residents. 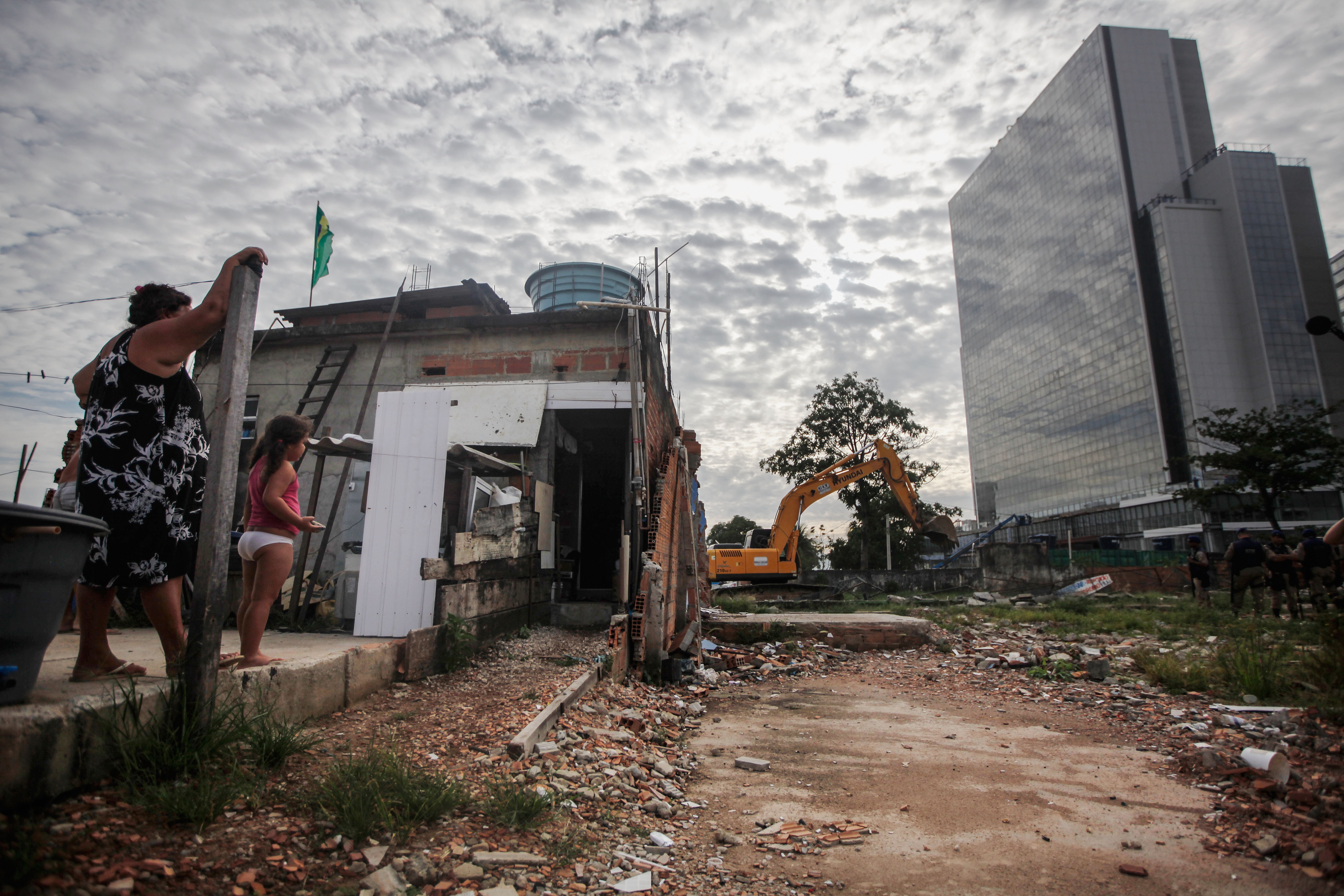 And for Vila Autódromo, the lives of hundreds of people were about to be turned upside down. The land that the community sat on was sold to a developer who intended to raze the homes and businesses of Vila Autódromo and incorporate the land into the Olympic Park. At first residents were given the “opportunity” to give up their homes and be given new apartments elsewhere in the city. Some accepted, only to find that the new apartments were shoddily constructed, with water leaking between floors, and, in one case, a resident told us, a first-floor balcony railing that gave way when a child leaned on it, which could have been tragic had the family lived much higher.

Remaining residents refused to budge, and that’s when the authorities got violent. Police physically clashed with residents, knocking homes to the ground and leaving some, including seniors, bloodied and homeless. The demolitions were conducted sloppily. Residents told us that when the supermarket was knocked down, the authorities neglected to shut off the power, resulting in live wires leaping about the site, sending residents and the bulldozer operators running.

As the months went by, the evictions and destructions continued. One man lost his home when his housekeeper, who was looking after his home while he was away, was taken to the hospital. Another woman was being honored by the state legislature for her “defense of home and community,” and returned to find an empty lot. 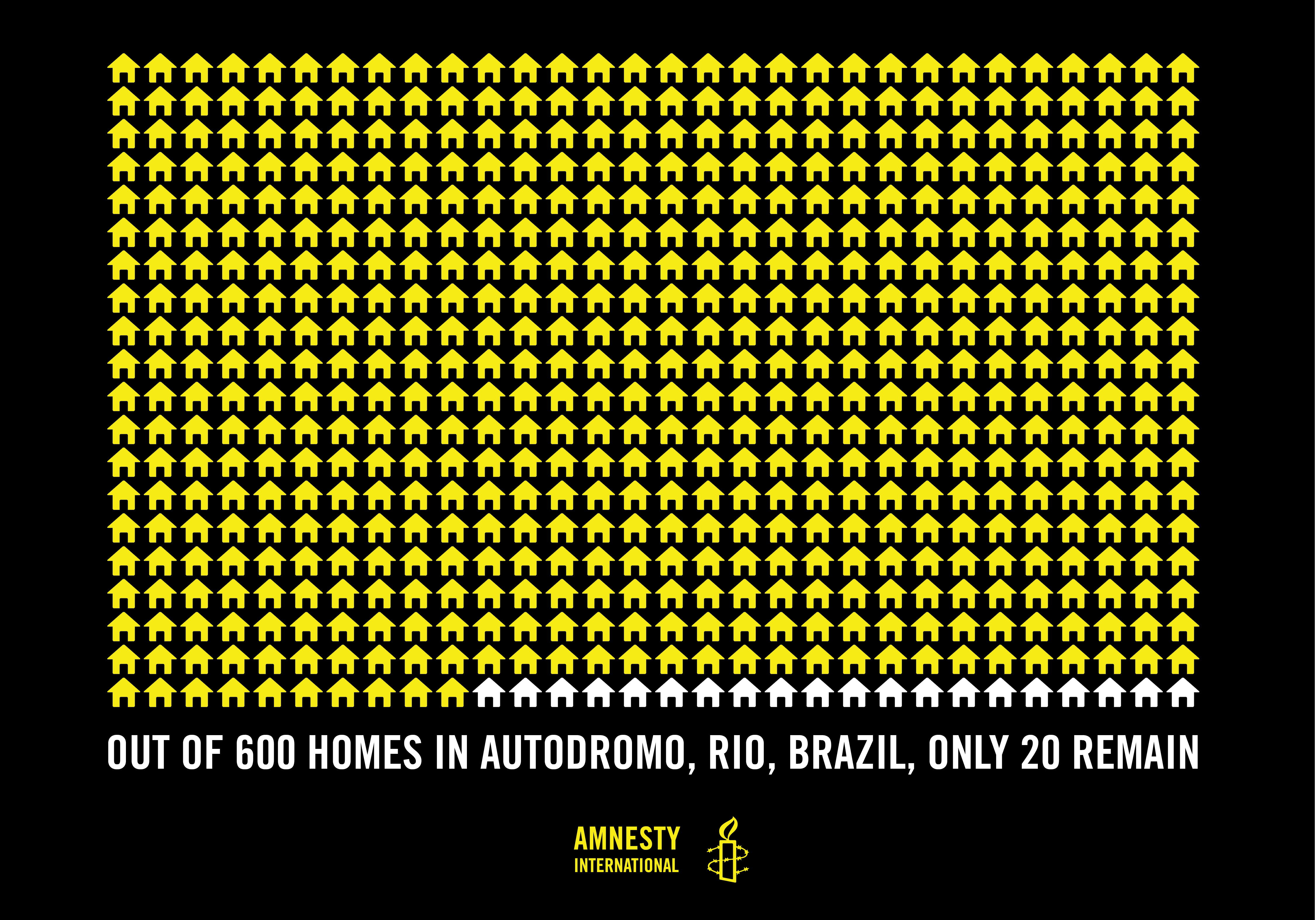 When we visited in March, there were only 20 families left. Longtime resident Sandra Maria de Souza showed us what was left of their town. The fence dividing the favela from the Olympic construction is covered in graffiti critical of the mayor, the developer and the Olympics themselves – the easiest and most visible way for residents to make their frustrations known.

One house and been demolished just prior to our arrival. One wall still stood, albeit with a round hole punched through it through which we could see the ruins inside. The outside wall still bore the legend “A baby lives here. Please respect the residents of Vila Autódromo.”

A hammer-wielding scavenger was already clambering across the remnants of the roof for copper. 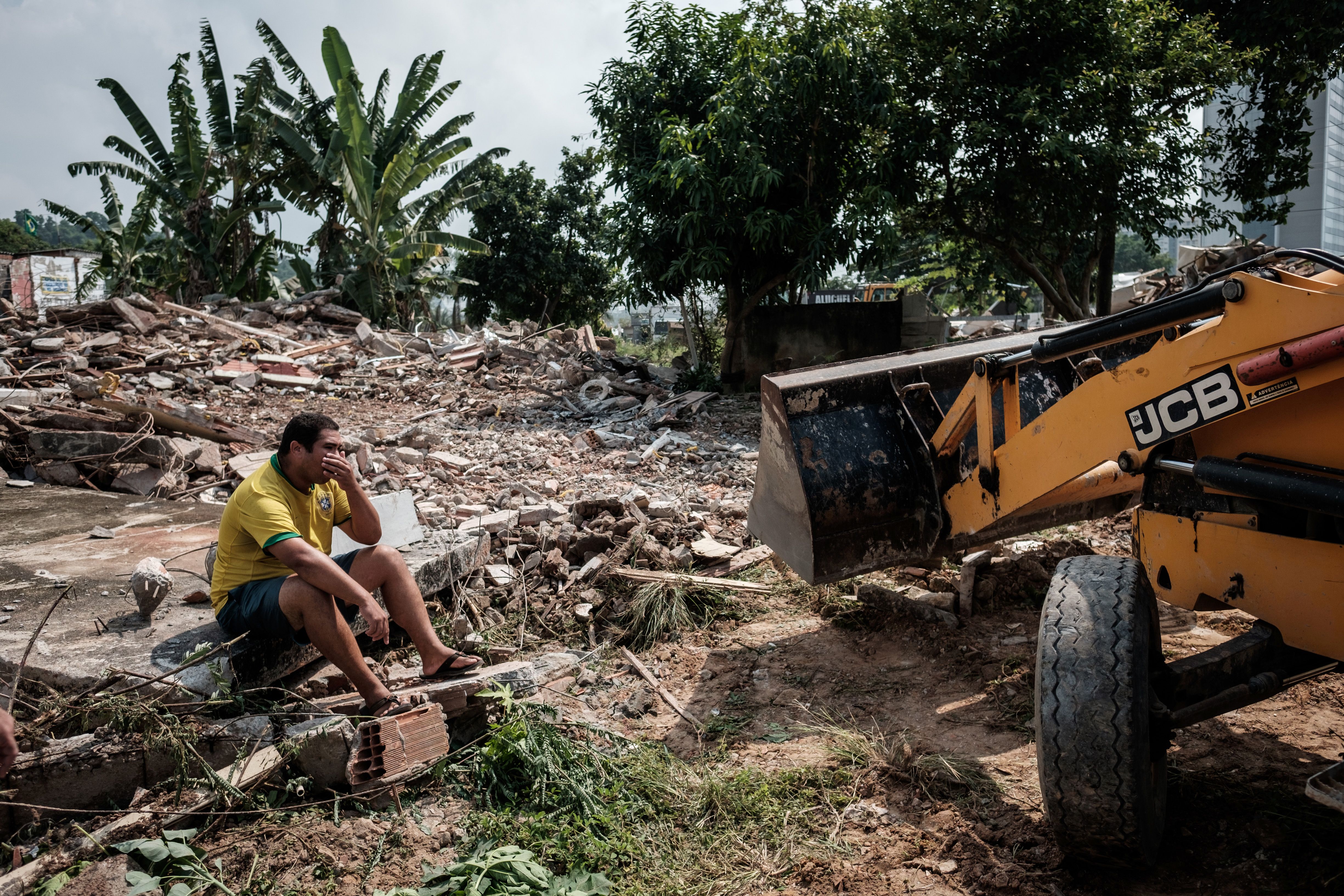 Brazilian Marcio Henrique sits on the ruins of a demolished house next door to his, at Rio de Janeiro’s Vila Autodromo neighbourhood, near the construction site of the Olympic Park for the Rio 2016 Olympic Games, on March 8, 2016. (YASUYOSHI CHIBA/AFP/Getty Images)

We spoke with residents, including 51-year-old Maria da Penha, who showed us a shocking photo of her bloodied face during one of the clashes with police. She lost her home, and now lives in the still-standing church.

Maria and Sandra introduced us to their children, their pets, their homes. They explained that they could not leave – not just because they had nowhere else to go, but because this is where they raised their families and built their lives. The remaining families tried to carry on as close to normal as possible. One woman ran a beauty shop out of her home. Soccer jerseys waved on clotheslines. Children played on some playground equipment that had so far survived the destruction.

Two months after our visit, the holdouts won their improbable battle. They would be able to stay on their land, and the city would build new homes for them. They had won the right to remain, even though their community was now unrecognizable, and many of those who had left would not be able to return. But there is concern that the public will focus on the happy ending, and not what had happened over the past few years. Vila Autódromo is a shadow of what it once was, with a fraction of the families. And while families are just starting to move into their new homes, it remains to be seen how sound the quickly-built structures are.

The Olympics will be a grand spectacle touting themes of unity, harmony, and equality in the spirit of the games. It’s a lovely idea. The Games and the ceremonies accompanying them will no doubt inspire millions and will be beautifully choreographed, scored, and captured like a picture postcard.

And somewhere just out of frame, within sounding distance from the music and the cheers, the residents of Vila Autódromo will be there, rebuilding their community.

16 thoughts on “Just Off-Screen in Rio, a Community’s Homes Vanish in Olympic Shadow”