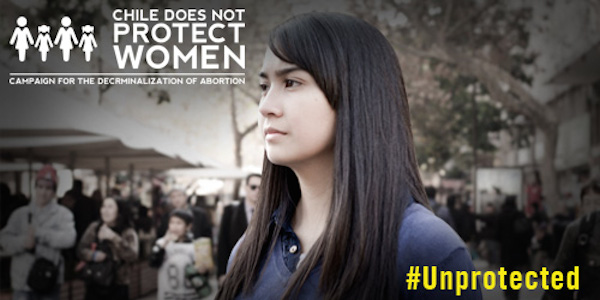 In July 2013, an 11-year-old girl became pregnant after having been raped repeatedly for two years by her stepfather. However, ending the pregnancy was not an option for her. In Chile, where she lives, abortion is outlawed in all cases, even in cases of rape and even for children.

Right now, Chile is one of a very few remaining countries in the world that has a total ban on abortion. This means that abortion is illegal, even if a woman’s or girl’s life or health is at risk, if the fetus is not viable, or if the pregnancy is a result of rape or incest. Those who can afford to travel abroad get the treatment they need. Those who can’t have to resort to clandestine abortions that can put their lives at risk and make them criminals in the eyes of the law. In cases where unsafe abortions result in complications, seeking treatment at a medical center means running the risk of being reported to the authorities and serving three to five years in prison.

For the 11-year old in Chile, this meant that the State did not provide her with all the psychological and medial support she needed, neither did it provide her with all the options regarding the pregnancy, including access to safe abortion services. Denying women and girls access to all their choices is unacceptable; these restrictions on abortion violate human rights guaranteed under international law.

The United Nations Universal Periodic Review (UPR) has called upon Chile to reform its draconian abortion laws, for the sake of the health and well-being of pregnant women and girls, and Amnesty International is calling for an end to these laws that fail to protect the rights of women and girls.

In 2014, Chilean President Michelle Bachelet announced that a bill reforming the country’s abortion laws would be considered by the government, despite the Chilean Congress’s consistent rejection of similar bills. In early 2015, the bill was sent to Congress and is now under legislative discussion. Were such a bill to pass, Chile would become the 37th country in the last 20 years to reverse abortion ban laws. Yet significant hurdles remain for the bill, which is stalled on the floor.

Despite political stalling, the work to protect the sexual and reproductive rights of Chilean women continues. On 8 March 2015, International Women’s day, an estimated 8,000 people marched in the streets of downtown Santiago demanding safe, legal abortions. Additionally, the Chilean delegate recently announced to the UN Human Rights Council that Chile continues to seek abortion law reforms based on recommendations made under the UPR.

These are important steps forward, but more needs to be done.

As part of Amnesty International’s My Body, My Rights campaign, we call on all States to decriminalize abortion in all circumstances and provide legal and safe abortion at least in cases of pregnancy as a result of rape or incest, when the health or the life of the mother is at risk, or when there is fatal or severe fetal impairment.