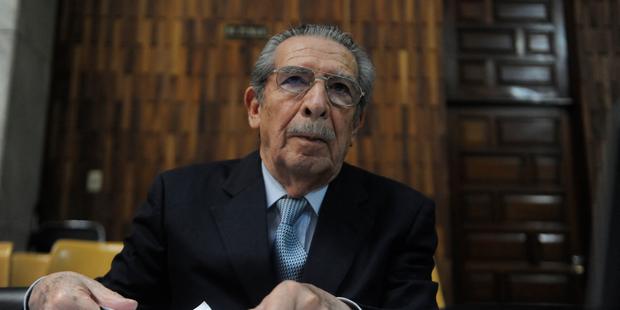 The trial against former Guatemalan leader General José Efraín Rios Montt for genocide during his time in office has restarted. Here are 10 reasons that show why the Central American country’s dark past is still relevant today.

1. Guatemala is located in Central America, bordering Mexico. Around half of its population is indigenous, including many Maya peoples. The country is one of the most unequal in the region – with high rates of illiteracy, infant mortality and malnutrition, particularly in the countryside. Organized crime and violence are also widespread.

2. Between 1960 and 1996, Guatemala was immersed in a bloody internal armed conflict that pitted the army against guerrilla groups. More than 200,000 men, women and children were murdered or disappeared during this 36-year-long war, most of them were indigenous.

3. General José Efraín Ríos Montt led the country’s military government between March 1982 and August 1983 – one of the bloodiest periods of the conflict when there was an aggressive campaign targeting anyone deemed to be supporting left-wing guerrillas.

4. The conflict ended in 1996 with the signing of a Peace Accord, which the government pledged to clarify the truth about what had happened in the three decades of violence. In 1999, a report by the UN-sponsored Commission of Historical Clarification concluded that the Guatemalan state was responsible for 93 percent of abuses. The Commission also said that in 1981 and 1982 genocide was committed by the State in the Ixil, Zacualpa, northern Huehuetenango and Rabinal areas of Guatemala, where between 70 and 90 percent of the communities were wiped out.

5. This is the first time a former Guatemalan head of state is being tried for genocide. The case against Rios Montt has been ongoing since 2001, but has been subject to a number of obstacles, including numerous constitutional appeals filed on his behalf and his immunity as a member of congress, which he lost in January 2012.

6. Rios Montt is charged with being the intellectual author of the death of 1,771 people, enforced displacement of 29,000, sexual abuse against 8 women and torture or at least 14. In March 2012, he was also charged with the death of 201 in Dos Erres, Peten, in December 1982 – no date has been yet set for the latest charges to be heard.

7. The trial against Ríos Montt and General Mauricio Rodríguez Sánchez – his former head of intelligence – started on March 19, 2013. On April 18, in the final phase of the trial, after more than 100 witnesses and experts had appeared, a judge in a separate Court from the trial Court ordered the trial to be annulled and returned to a pre trial phase.

8. The trial court reconvened on April 19 and refused to annul the trial, but did suspend proceedings until higher courts resolved the matter. After a series of rulings by higher courts, on April 30 the trial resumed.

9. Former generals Mejia Victores – who was Defense Minister under Rios Montt and then succeeded him as president – and the former Army Chief of Staff, Hector Mario Lopez Fuentes, have also been charged but the cases against them were suspended due to their health state.

10. In August 2011, in one of the most recent trials against those responsible for massacres, four soldiers were sentenced to more than 6,000 years in prison for killing 250 people in the northern town of Dos Erres in 1982.