I want to pinch myself and make sure I’m not dreaming because I’m sitting next to so many visionaries, activists, and government officials. Leaders like St. Louis native Rep. Maxine Waters: co-author of the “I Have a Dream” speech Dr. Clarence Jones; and Rep. John Lewis.

These people are icons, but also ordinary people who had the courage to do something in the face of risk and uncertainty because of their belief that we should treat each other better.

The conversation always reminds me, powerfully, how my issues are global, and vice versa. These young people in Mexico also fear those who are supposed to serve and protect – and they’re also organizing despite the obstacles to demand better.

I’m with a group of Amnesty International USA members. We are part of a human rights organization that is right now working with activists to demand reparations for the torture that took place in Chicago by police officers from 1972 to 1991. We are working now with students in Mexico, Brazil and Hong Kong to demand justice for them and for other human rights violations all over the world.

This weekend in Selma, I marched across the Edmund Pettus Bridge. I marched and I saw people from every community acknowledging and revering each other with love. 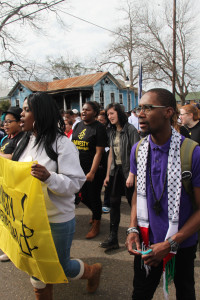 The overwhelming feeling of this moment and of what it means to walk along the same steps as my elders moves me deeply. I can’t hold back the tears fueled by hope, inspiration, and drive. We must continue to march and reach the other side of the bridge because our lives depend on it.

As we depart from Selma, I take in the breathtaking southern longleaf pine trees and I wonder about the dark stories these trees can tell. The land’s soil soaked with the blood of those hung and silenced because of their skin color.

The echo of Billie Holiday singing “Strange Fruit” plays in my head: “Black bodies swinging in the southern breeze, Strange fruit hanging from the poplar trees.” I reflect on how far we’ve come and how I can contribute to move forward the change that still needs to happen.

If you want to take action on human rights issues ranging from police accountability to working to release Prisoners of Conscience, join hundreds of activists and human rights defenders at Amnesty International USA’s annual human rights conference March 20-22 in Brooklyn, NY and see how a moment becomes a Movement.

Learn more at http://amnestyusa.org/AGM2015. Follow along with our hashtag #AmnestyM2M.

2 thoughts on “From Ferguson to Selma: An Activist’s Journey”