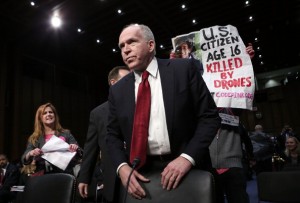 No more secrets with human lives at stake. Tell the Obama administration to disclose the secret drone killing memos to the public and follow the “rule book” for the use of lethal force that already exists — international law.

Earlier today, Attorney General Holder again defended the U.S. drone killing program and said President Obama will soon do the same. The Obama administration claims its use of drones to kill is “legal,” “ethical,” and “wise.” But we’re not buying it.

International law permits the use of lethal force in very restricted circumstances. But from the little information made available to the public, U.S. dronestrike policy appears to allow extrajudicial executions in violation of the right to life, virtually anywhere in the world.

Public outcry over the killer drone program is growing. And with Brennan’s nomination and drones back in the headlines, Congress may finally be starting to listen.

The Senate Judiciary Committee this morning asked Attorney General Holder tough questions about drones and lethal force. But so far, survivors of drone strikes and experts in international human rights law have been missing from Washington’s drone conversation.

Despite all the talk that new laws, rules or a “kill court” are needed, the fact is that the “rule book” for the use of lethal force with drones already exists –international human rights law and, in the exceptional circumstances where it applies, international humanitarian law (the law of armed conflict) as well. The Obama administration must follow the law. Congress and the courts must hold them to it.

Drones may be here to stay. But now is our best chance to make sure U.S. drone policy follows the rule book that protects all of us.