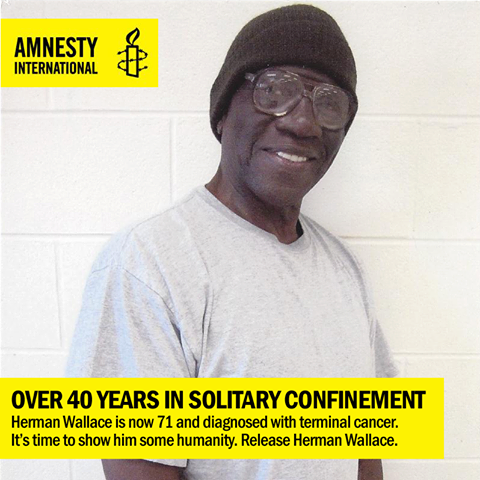 Herman Wallace may not have a lot of time left – he’s 71 years old, has advanced liver cancer, and has survived four decades of imprisonment in the cruel, inhuman and degrading conditions of solitary confinement.

He and fellow prisoner Albert Woodfox, of Angola 3 fame, have been held in solitary confinement longer than anyone else in modern U.S. history. The men have spent the past 41 years of their lives alone in tiny cells for 23 hours a day, deprived of any meaningful human interaction.

He and fellow prisoner Albert Woodfox, of Angola 3 fame, have been held in solitary confinement longer than anyone else in modern U.S. history.

”
But Herman is fighting for his life and for justice. Today, we wanted to update you and shed just a bit of light into this bleak situation. On Friday, Herman Wallace was reclassified from a maximum to a medium security prisoner. That means he now has access to the day room and will no longer wear leg restraints – an incredible change for someone who has been held in isolation for more than 40 years. Thank you to the more than 30,000 of you who helped make this possible.

The wheels of change may turn more slowly than we’d like, but we remain committed to pursuing justice. Herman Wallace should not die alone.

Why wouldn’t Louisiana officials simply release an elderly prisoner with advanced cancer on humanitarian grounds? Evidence suggests that it is in part because Herman dared to organize and speak out against inhumane treatment and racial segregation inside one of United States’ most brutal prisons.

Herman Wallace and Albert Woodfox are the two imprisoned members of the ‘Angola 3’, three young black men who were thrown in solitary confinement after working against continued segregation, systematic corruption, and grave abuses in the infamous Angola prison. Originally imprisoned for unrelated cases of armed robbery, Herman and Albert were later convicted for the murder of a prison guard in 1972. However, no physical evidence links either man to the murder.

In the decades since Herman and Albert’s conviction, numerous legal concerns have risen to the surface from the racially charged underbelly of the U.S. prison system. These are just a few glaring flaws we documented in our report “100 Years in Solitary: The ‘Angola 3’ and their Fight for Justice“:

Prison authorities have broken their own policies to justify Herman’s continued incarceration in harsh and inhumane conditions. After decades in these conditions, a highly questionable conviction that continues to be challenged by the courts and the now a tragic prognosis of terminal cancer, the next step seems all too clear: Herman Wallace should be released.

In addition, please join us in reminding the two men that we are standing with them, even if the state of Louisiana tries to keep them in isolation. Send your letter of support directly to Herman and Albert – show them you care.

Keep up the pressure. We will not give up.