We’re down to the wire with the Arms Trade Treaty negotiations.  The next 24 hours will determine if the world is at long last ready to agree on standards for the lawful international transfer of lethal weapons.    The League of Nations tried twice to put some humanitarian limits on arms deals, but both efforts collapsed.  This time it could be different…really. 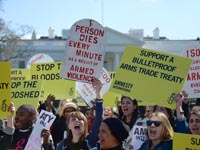 Amnesty activists rally outside the White House in support of a strong Arms Trade Treaty.

A final draft of the treaty was released today, and there are good reasons for cautious optimism – with an emphasis on caution.  The final draft doesn’t contain everything we hoped for, but it’s a vast improvement over the version in play last July.   Among other things, the draft treaty now clarifies that it will be a breach of international law to supply weapons when the supplier knows at the time of authorization that they will be used for genocide, crimes against humanity, attacks against civilians and grave war crimes. Small but significant changes have edged the text closer to the Golden Rule we’ve been advocating for more than ten years:  “Governments must prevent arms transfers where there is a substantial risk that they are likely to be used for serious violations of international human rights and humanitarian law.”

For Amnesty International this has been a long road. We helped spark this initiative with the 1997 Nobel Laureates’ Code of Conduct on Arms Transfers, and since the launch of our Control Arms Campaign back in 2003, Amnesty members all over the world have been calling for an international treaty to keep weapons out of the hands of human rights abusers.   Like activists in the US, they have had their eyes on Washington.

Over the past few weeks Amnesty members from Japan, Chile, Senegal, Nepal, Iceland and elsewhere in the world have stepped up the campaigning.  They’ve been delivering petitions,  organizing demonstrations, and tweeting like crazy with a single message for the White House:  please support strong human rights provisions in the treaty!

Why have Amnesty members worldwide been doing so much to get President Obama’s attention?  Because the US is a pivotal player in these negotiations, and for the most part US diplomats have been in the background, holding back.  In fact, last year it was the U.S. who pulled the plug on finalizing the Arms Trade Treaty last year when they walked away from the table in the final minutes.  We can’t let that happen again.

Tomorrow’s session at the UN could end in victory for people around the world whose lives and welfare are threatened by weapons in the hands of those who use them to abuse human rights.  It’s all up to the diplomats now to do the right thing.

Keep the pressure on the White House – send emails, tweet or pick up the phone beginning at 9am EST tomorrow.