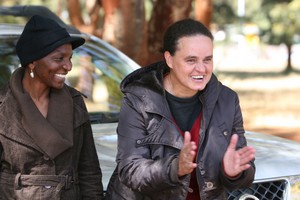 , 16 August 2008. Jenni Williams and Magodonga Mahlangu are leaders of Women of Zimbabwe Arise (WOZA), whose members have repeatedly been arrested by the Zimbabwean police while taking part in peaceful demonstrations to protest the worsening social, economic and human rights situation in their country. Williams and Mahlangu themselves have been detained and ill-treated by the police dozens of times, including recently, when they spent nearly six weeks in detention at Chikurubi Maximum Prison in Harare, only to be granted bail after the elections took place in June 2008. Their crime? Engaging in peaceful protest about state-sponsored violence at the time of the elections.