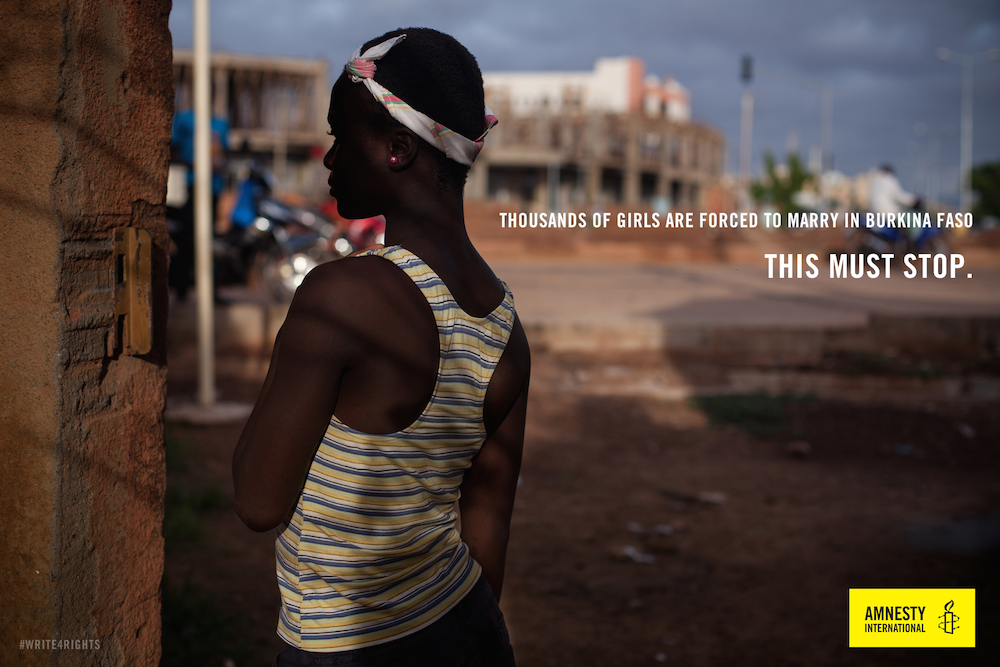 A few weeks ago, I found myself stressed as I drowned in hours of homework. After deciding to take a break, I began to check my email. I opened a message about Write for Rights, Amnesty International’s largest event, and clicked over to the website to read about this year’s twelve Write for Rights cases.

The case involving young women and girls in Burkina Faso, a country in West Africa, looked interesting, so I began to dive further in. I learned that in Burkina Faso, thousands of girls and young women are forced into early marriage and must suddenly and unwillingly dedicate their lives to another man. In order for families to collect financial returns by marrying off their daughters and sisters, safety, human rights, and happiness are compromised.

I was shocked and could feel my heart racing as I read more about the lives of these women. My body felt paralyzed and I could feel a sense of outrage consume me. I was shattered. Suddenly, my homework did not seem so bad.

I often take for granted that as a seventeen year old woman, I can enjoy my rights to have an education, establish a career for myself, and choose if, when, and who I will marry. Every day, I prepare for an independent life with endless possibilities, a life that is denied to many girls in Burkina Faso.

I had to act. I had to get involved. After reviewing this case, I realized that I have the potential and resources to join a movement and help change our world. I signed up for Write for Rights so that I can stand with women and girls in Burkina Faso against forced marriages by writing to Burkina Faso’s Justice and Human Rights Minister. There were eleven other cases that needed my support too.

Last year, I helped to organize a Write for Rights event at my high school, and I witnessed the impact that writing letters has not only on those with whom we stand, but also on the individuals writing the letters. As I walked around my Write for Rights event last year, I watched as over two hundred students read about the cases and engaged in conversation with one another. I saw the same shock on their faces, heard the same racing hearts, and witnessed the same desire to do something.

People all around me began to realize the power of the pen. These students, just like me, were now attached to these cases at a personal level. They were not only proud, but also eager for the chance to change lives.

This year, my student group is hosting an event again. Write for Rights has given me, as well as other high school and college students, the opportunity to directly impact the lives of other people. There is an undeniable sense of empowerment when watching hundreds of students be educated about the challenges facing the world, and how activism through sincere involvement can guarantee positive change. With just a pen and piece of paper, we can stand in solidarity with others, shine a light on human rights abuses, and help change our world.

Purva Khanapure is the current Student Activist Coordinator for Central New Jersey. She is a senior at South Brunswick High School and is planning to major in biological sciences or neuroscience during her undergraduate education. She is also the vice president and a third-year member of South Brunswick High School’s AI student group. In the past three years, she helped organize one of the biggest Write-for-Rights events in the nation, attended the Northeast Regional Conferences in Boston, and was an avid protestor in AIUSA’s annual Get On the Bus event in New York City.

9 thoughts on “Write for Rights: A Chance to Change Our World”