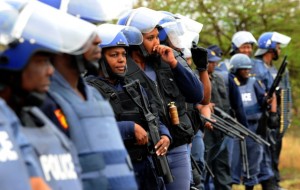 South Africa has a precious opportunity to address these egregious acts of violence, but it must do so quickly. The violence must be denounced by all members of society and not just in words alone. Yes, the South African Police Commission expressed “extreme shock and outrage” at the nine police officers who dragged the taxi driver through the streets of Johannesburg, but “extreme shock” does not bring these individuals to justice. The South African Police Commission must make a public commitment to end these horrific acts defined by excessive use of force. Furthermore, they must be held accountable to that commitment. Acts such as these must not go unpunished.

South Africa has numerous natural resources, yet it is argued that since the fall of Apartheid, violence and income disparities within the country have worsened. It is country full of people who made a commitment to forgiveness, a commitment to moving forward beyond the past. It has given me hope in the power of humanity, even when humanity seemed to be at its worst. South Africans have been through too much to see it fall into the downward spiral of endemic violence. This is a turning point. These violent acts must be admonished. Only then can the country move forward as was the hope 20 years ago.

2 thoughts on “Violence in South Africa”