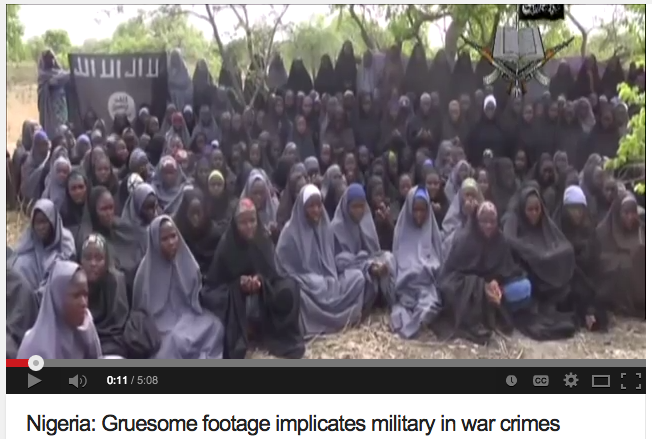 In one video, 16 boys and young men are seated in a line, in front of a pit, likely outside of Maiduguri. There are some trees nearby.

These victims were among more than 600 people, mostly unarmed recaptured detainees, executed in various locations across Maiduguri in one single day this March.

”
One by one, they are called forward to lie down at the edge of the pit. As their heads and feet are held down, the remaining of the group looks on, blankly. There is no resistance – no audible cries or whimpers from the victims. The scene is systematic, and the motions almost perfunctory. One by one the throats of the boys and men are cut with a large knife, and their bodies – probably extinguished of life – are rolled into the pit atop those that stood up and lied down before them.

As horrific as this scene is, the brutality displayed is not new in north-eastern Nigeria. Since 2009, armed attacks by the Boko Haram group, and fighting between the armed group and the security forces, has left tens of thousands dead, with some 4,000 – mostly civilians – killed this year alone.

Boko Haram has committed egregious crimes, including the bombing of markets, attacking schools and killing students and teachers, and attacks on towns that leave streets littered with the bodies of civilians.

The conflict and crimes in Borno state and north-eastern Nigeria gained additional notoriety with the kidnapping of some 240 schoolgirls from the town of Chibok, a despicable criminal act that had taken place countless times before, albeit in smaller numbers. Through social media and direct appeals, millions called for the authorities to “bring back (our) girls.”

A Crime That Shocks the Conscience

The executions in this video were not carried out by Boko Haram, however, but by the very security forces charged with protecting civilians and schoolchildren in north-eastern Nigeria.

The 16 boys and men in the video noted above would also have been among the disappeared, were it not for witness testimony, and the perpetrators’ decision to capture their crimes on handhelds. These victims were among more than 600 people, mostly unarmed recaptured detainees, executed in various locations across Maiduguri in one single day this March.

Amnesty International has long been urging the Nigeria authorities to conduct investigations in alleged human rights abuses by their security forces, and the CJTF volunteers, while at the same time urging the government to fulfill its obligation to protect civilians from abuses by Boko Haram.

Indeed, our research allowed us to conclude that the kidnapping of the Chibok girls could have – or should have – been prevented, with early warning of the impending assault being communicated to the military authorities hours before the attack.

Today’s reporting should shock the conscience of us all. The civilians of north-eastern Nigeria face oscillating terror, at the hands of Boko Haram, and at the hands of the forces responsible for their protection. The crimes documented in today’s reporting are indicative of a wider pattern of abuses by the CJTF, police, and military in the region, long documented in our reporting, and for which impunity still pervades.

As I type these words, President Goodluck Jonathan is only a few miles away, participating in the U.S.-Africa Leaders Summit. Today, those of us that demanded “bring back (our) girls” must call on him to end impunity for crimes committed by Boko Haram, security forces and CJTF alike. A prompt, independent and impartial investigation must be carried out, and those responsible held to account through fair trial and without recourse to the death penalty.

These crimes – if left unprosecuted – can only further erode the ability of the government to maintain the rule of law in the conflict-affected areas of Nigeria.

These crimes bring no one home.

One thought on “Violence in Nigeria: Bringing Back No One”