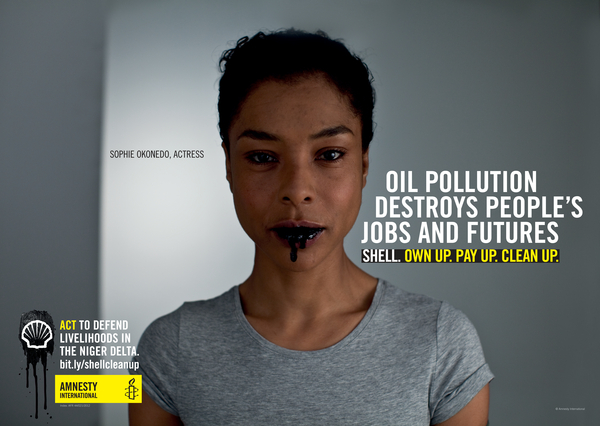 In the powerful new report “Bad Information,” Amnesty International and the Center for Environment, Human Rights and Development (CEHRD) reveal that Shell has manipulated investigations into its oil spills in Nigeria.

“Shell is being disingenuous about the devastation caused by its Niger Delta operations. This new evidence shows that Shell’s claims about the oil spills cannot be trusted,” said Audrey Gaughran, Director of Global Issues at Amnesty International.

New analysis from an independent expert found that so-called official investigation reports into the cause of oil spills in the Niger Delta can be “very subjective, misleading and downright false.”

The report highlights systemic weaknesses in the way the cause of a spill and the volume are determined – with some significant errors in the volumes that are recorded as spilt. The oil companies do not have to back up the claims with full and independent evidence. The evidence that does exist remains firmly under their control.

The consequences for the affected communities are devastating and can result in them receiving little or no compensation.

“Shell looks to blame others based on investigation reports that, in some cases, amount to nothing more than dodgy dossiers,” said Styvn Obodoekwe, Director of Programs at CEHRD.

The expert found cases where the stated cause of an oil spill appears to be wrongly attributed to sabotage. In many other cases, sabotage was listed as the cause when there was little or no data recorded to back up the claim.

Overall, Accufacts concluded that many official investigation reports were “technically incomplete,” and others “appear to be serving another agenda, more driven by politics…than pipeline forensic science.”

Nigeria’s under-resourced regulatory agencies have little oversight or control of the process and are dependent on the oil companies to carry out investigations. In one incident, a regulator sent a student on work experience as their sole representative to an oil spill investigation. “This is a system that is wide open to abuse – and abuse happens. There is no one to challenge the oil companies and almost no way to independently verify what they say. In effect it’s ‘trust us – we’re big oil,” said Gaughran.

Shell has made some improvements to its investigation reports since 2011, including the addition of images of oil spills on its corporate website. But serious flaws remain, including weaknesses in the underlying evidence used to attribute spills to sabotage.

Information listed in oil spill investigation reports determines whether oil companies are liable to pay compensation to affected communities. Despite serious flaws, the reports are cited as evidence in litigation.

Amnesty International and CEHRD found evidence of Shell having changed the officially recorded cause of a spill after an investigation had taken place.

In one incident, secretly filmed video of an investigation shows how officials from Shell and the regulator tried to subvert the evidence by persuading community members on the investigation team not to attribute the cause to equipment failure.

Video footage of a leak from an oil spill in Bodo from 2008 reviewed by Accufacts shows that Shell seriously under-recorded the volume spilt. Shell’s official investigation report claims only 1,640 barrels of oil were spilt in total, but other evidence points to the amount being at least 60 times higher.

Hundreds of oil spills occur in Nigeria every year, causing significant harm to the environment, destroying livelihoods and placing human health at serious risk. These spills are caused by corrosion, poor maintenance of oil infrastructure and equipment failure as well as sabotage and theft of oil.

Shell has repeatedly claimed to its investors, customers and the media that sabotage and theft were behind the vast majority of spills. But the facts do not support this assertion.

“Instead of being in the dock when there is an oil spill in Nigeria, Shell gets to act as judge and jury. It is the communities that suffer a life sentence, with their land and livelihoods destroyed by the pollution,” said Gaughran.

“Shell and other oil companies refer to sabotage and theft in the Niger Delta as if it absolved them of responsibility. The Niger Delta is the only place in the world where companies brazenly admit to massive oil pollution from their operations and claim it is not their fault.”

New evidence shows that Shell's claims about its oil spills cannot be trusted.

”
“Almost anywhere else, they would be challenged on why they have done so little to prevent it.”

Shell’s claims about how much oil is spilt due to sabotage and theft are increasingly being challenged. In June 2013, a Dutch agency found that the oil giant’s statements were based on disputed evidence and flawed investigations.

“As Shell’s claims on sabotage and theft come under scrutiny the company’s story is changing; we now hear more about illegal refining being the cause of oil pollution. Yet again, Shell is spinning a real problem into a PR shield for the company,” said Obodoekwe.

“Illegal refining causes pollution, but Shell cannot claim it is occurring in specific cases unless and until it produces reliable proof.”

The report argues that companies should be legally liable for failure to take effective action to protect their systems, including from sabotage.

Amnesty International and CEHRD are calling on the oil companies to publish all investigation reports, associated photos and videos. They must provide verifiable evidence of the cause and damage to the impacted area.

The Nigerian government must also substantially strengthen the capacity of the regulators including by providing an increased budget for its operations.