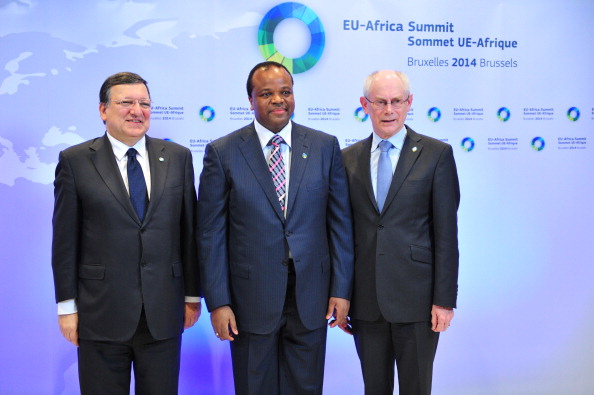 As King Mswati III and his delegation board their royal airplane to Washington, D.C. to lend a Swazi voice to the U.S.-Africa Leaders Summit, two men remain imprisoned in Swaziland for merely exercising their human right to use their voices.

Last week, human rights lawyer Thulani Maseko and editor of The Nation news magazine Bhekithemba (Bheki) Makhubu were sentenced to two years in prison after being convicted on charges of contempt of court.

The charges arose from two articles published in The Nation in February 2014 that highlighted the lack of judicial independence and integrity in Swaziland. The two men were arrested under illegal warrants and were remanded without bail for the duration of the trial. The convictions and sentencing followed wholly unfair judicial proceedings.

Thulani and Bheki are human rights defenders who gave civil society a voice by calling attention to the human rights violations in Swaziland. As a result, they were arrested, detained, tried and punished solely for expressing their beliefs.

”
The presiding judge, Mpendulo Simelane, refused to recuse himself despite the fact that the he was named in one of the published articles. Objections from defense lawyers were met with a declaration from Judge Simelane, that the trial would be ‘sui generis’ (outside the normal law and procedures).

Furthermore, all court proceedings were held with an intimidating police presence resulting in arrests of some supporters of the two accused men.

The unlawful arrest, detention and conviction of Thulani and Bheki are just one example of the risks faced by human rights defenders as the Swazi government increasingly uses security forces and the judiciary to quiet dissent.

The political climate worsened when a series of draconian anti-terror legislation was signed into law in 2008 and gave the government yet another vehicle to oppress civil society activists. Two senior members of the democratic opposition party, Mario Masuku and Maxwell Dlamini, were arrested on sedition charges for statements they made at a non-violent May Day rally. They continue to be held without bail until their trial in September.

The U.S.-Africa Leaders Summit presents an opportunity to call attention to human rights concerns in Swaziland and on the African continent. The U.S. sent a message that it will not tolerate human rights violations when it withdrew Swaziland’s African Growth and Opportunity Act (AGOA) eligibility.

It is vital the U.S. Government continues that pressure by addressing freedom of expression and freedom of association concerns with the Swaziland delegation following the summit.

Thulani and Bheki are human rights defenders who gave civil society a voice by calling attention to the human rights violations in Swaziland. As a result, they were arrested, detained, tried and punished solely for expressing their beliefs.

Amnesty considers them to be prisoners of conscience and calls for their immediate and unconditional release. You can stand with Thulani and Bheki.

When King Mswati III comes to Washington, call on him to release Maseko and Makhubu and tell him that Swaziland must protect, respect and promote all human rights.

One thought on “Swaziland Prisoners of Conscience Stay Behind Bars During U.S.-Africa Summit”