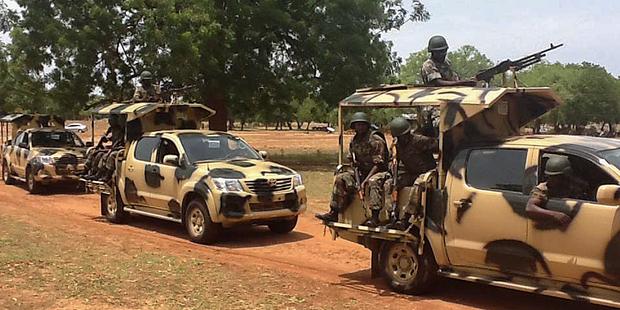 At Amnesty International, we are no strangers to suffering. Documenting human rights abuses is our daily work. Sometimes, however, we unearth evidence of such depravity that it leaves even our hardened investigators almost lost for words.

This has been the case with our revelations of war crimes from Nigeria today. The materials come from a recent mission by an Amnesty International research team which investigated widespread human rights abuses in Borno state, a region which gained worldwide notoriety following the kidnapping in April of more than 240 school girls by the armed group, Boko Haram.

Sometimes, however, we unearth evidence of such depravity that it leaves even our hardened investigators almost lost for words.

”
Amnesty International has been documenting and highlighting human rights abuses perpetrated by both Boko Haram and government security forces in northeast Nigeria for some time – those abuses were a key theme of a trip I made to Nigeria in 2012. But this latest research has uncovered incontrovertible evidence – including video footage – of extrajudicial executions and other serious violations by the Nigerian military and Boko Haram, on a truly horrifying scale.

Some of the video footage, images and testimonies collated have now been verified and an edited version of some of it will be released today. Graphic evidence of multiple war crimes is not easy to watch. But for President Goodluck Jonathan, his government ministers and military commanders it should be compulsory viewing. They should watch not despite it being hard to watch – they should watch because it is so hard to watch.

The footage includes deeply disturbing images of what appear to be members of the Nigerian armed forces and Civilian Joint Task Force (CJTF), a state-sponsored militia, executing detainees. One of the videos shows 16 young men seated in a line. One by one they are called forward and forced to lie down in front of a pit where their throats are slit and their bodies dumped unceremoniously into a mass grave.

The footage shows five young men killed in this way. The fate of the others is not captured on film but eyewitness accounts confirmed that nine of them had their throats cut while the others were shot dead.

These were among the over 600 extrajudicial executions that had taken place in and around Maiduguri on March 14 after the Nigerian military went on a rampage following Boko Haram’s attack on the military detention centre in Giwa Barracks earlier that day.

Other footage, taken in late July 2013, shows a mass arbitrary arrest of alleged Boko Haram members by the Nigerian military and CJTF – a common operation known as a “screening”. Arriving in the town of Bama in the morning, the security forces rounded all the men up in the central market, forcing them to strip. About 300 of them were released, up to 35 were accused of being Boko Haram members and ordered to lie down. Footage shows them being beaten with sticks and machetes before being loaded onto a military vehicle. They were taken away to the local military barracks and on July 29 they were all brought to their communities and shot dead, their corpses dumped around the town.

This was not the first time that the population of Bama had been “screened”, nor is it just the military who inflicts such abuses on the inhabitants. Over the years, Boko Haram has launched a series of deadly attacks against Bama, apparently in retaliation for what the armed group deems to be the locals’ cooperation with the Nigerian military.

Amnesty International has unearthed footage of the aftermath of Boko Haram’s most deadly assault on the town in which they killed nearly 100 people over the course of several hours on February 19. The video shows scores of corpses wrapped for burial.

Thus, the people of Bama are caught between the ruthless attacks by Boko Haram and the routine serious violations by the Nigerian security forces. That experience is mirrored in towns and villages across Borno state. It is little wonder that so many have fled or are living in a state of constant fear.

As the bloody insurgency waged by Boko Haram since 2009 has intensified, so, too, has the brutality of the Nigerian government’s response. Rural communities caught in the middle are terrorised by Boko Haram, on the one hand, and by the very military whose duty it is to protect them, on the other.

More than 4,000 Nigerians, the majority of them civilians, have been killed by both sides in this year alone. This includes the 600 people extrajudicially executed by the Nigerian military in Maiduguri in March. Last month, the town of Damboa fell to Boko Haram and in a separate incident in Kaduna state, 12 people appear to have been killed while in custody by the Nigerian military after being arrested during an apparently peaceful protest in which 21 other protesters were also killed after the military opened fire on them.

The gruesome footage from northeastern Nigeria is deeply troubling. More disturbing still is that these incidents of murderous brutality are only the tip of a larger iceberg. Our research suggests that the extrajudicial executions are part of a pattern of human rights violations by the Nigerian military and its civilian “helpers”, the CJTF.

As today’s revelations make clear, an immediate, impartial, independent, and thorough investigation is urgently needed to look into these serious and systematic violations of human rights and international humanitarian law in northeastern Nigeria.

The Nigerian government must publicly condemn such crimes and ensure an end to the human rights violations being carried out by the Nigerian military, including arbitrary arrests, incommunicado detention, torture and other ill-treatment, and extrajudicial executions. Above all, we must not see the simple denial of responsibility that we have seen far too often before.

“When two elephants fight, it is the grass that is trampled,” says an old African proverb. Nowhere is that truer than in northeastern Nigeria today. The people there have no one they can trust and they have nowhere they can turn. In the words of another proverb, “They have nothing left but their eyes to cry with.”

This oped was originally published in Al-Jazeera

One thought on “No One To Trust, Nowhere To Turn In Nigeria”