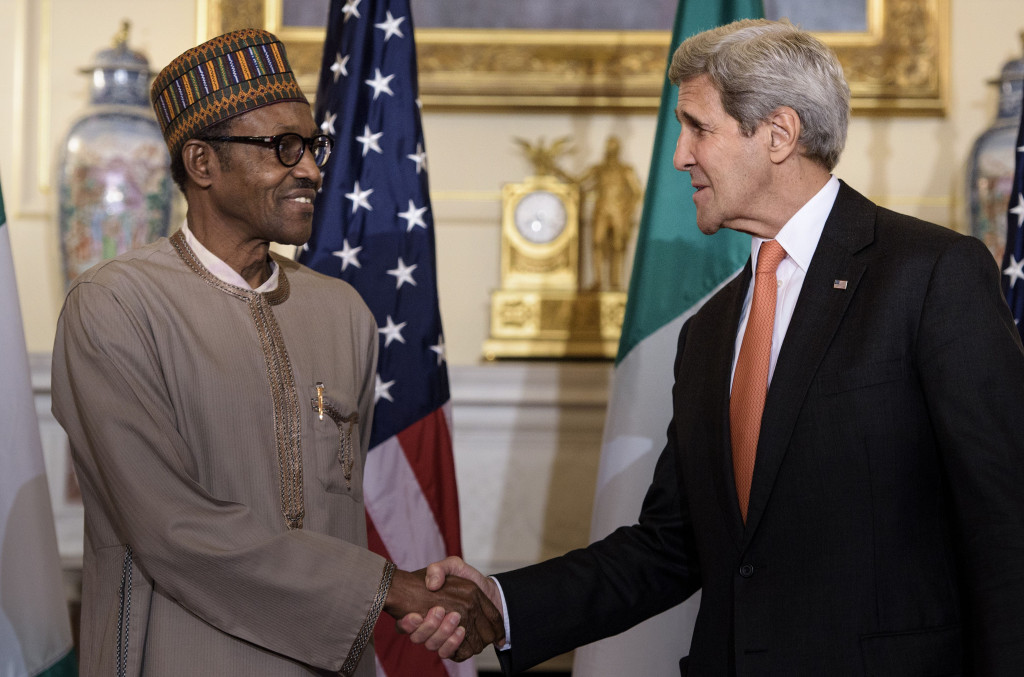 US Secretary of State John Kerry shakes hands with Nigerian President Muhammadu Buhari at the US Department of State July 21, 2015 in Washington, DC. (BRENDAN SMIALOWSKI/AFP/Getty Images)

Nigerian President Muhammadu Buhari visited Washington, DC recently, soliciting U.S. support for his country’s struggle against the armed group known as Boko Haram. The struggle is a mighty one. As Amnesty International reported in April 2015, the armed Islamist movement in northeast Nigeria has committed war crimes and crimes against humanity, and it must be held to account.

As evidence of Nigeria’s commitment to defeating Boko Haram, Mr. Buhari touted his visits to the members of the Lake Chad Basin Community (Cameroon, Chad and Niger) to promote regional cooperation toward this goal. He mentioned the $21 million in funding Nigeria has approved for the Multi-National Joint Task Force. Even so, he argues that support from the international community is sorely needed – in particular, from the U.S. In the process, however, Buhari attacked the U.S. policy that Congress has put in place to restrict U.S. aid to known human rights violators, the Leahy Law.

The Leahy Law prohibits U.S. grants of weapons transfers and military training for foreign security (military, police, border guards, etc.) units that have been credibly linked to gross human rights violations, as determined by the Department of State. The U.S. sets a high bar when it uses the term “gross human rights violations,” including only extrajudicial execution, forced disappearance, rape and torture. The worst of the worst.

Before any discussion of the importance of withholding U.S. taxpayer dollars from training and equipping the perpetrators of these heinous crimes, it’s important to set Mr. Buhari right on a couple of key points.

Nigeria’s President laments that “regrettably, the blanket application of the Leahy Law by the United States on the grounds of unproven allegations of human rights violations levelled against our forces has denied us access to appropriate strategic weapons to prosecute the war against the insurgents. […] our forces have remained largely impotent because they do not possess the appropriate weapons and technology which they could have had, had the so-called human rights violations not been an obstacle.”

Mr. Buhari is incorrect when he refers to a “blanket application” of the Leahy Law. There is no such thing. The Leahy Law only prohibits U.S. aid to specific units within a foreign country’s security forces from receiving arms or training – not the whole country. The Leahy Law exists precisely because the U.S. Congress decided that country-level bans were too impractical. Mr. Buhari’s military is not totally banned from U.S. military assistance – just the units responsible for gross human rights violations.

A pattern of atrocities, such as those committed by Boko Haram, cannot be effectively extinguished by more of the same. This only engenders fear, victimizes populations that are already under assault, and brews patterns of retribution that make peace a distant dream. Yet Mr. Buhari has the temerity to argue that denying weapons to those who actively perpetuate this cycle of violence “has aided and abetted the Boko Haram terrorist group.” No. What aids and abets Boko Haram’s aims is to further victimize the populations of civilians who should be able to trust the Nigerian security forces, but who instead find themselves with nowhere to turn. Mr. Buhari’s military does not need “far more substantial counter-terrorism assistance with minimal strings,” as he claimed this week: no, the strings are not the problem. What it needs is accountability, and justice for the victims of human rights violations perpetrated by Nigerian security forces and by Boko Haram. Only then can the cycle of atrocities find an end, and real security become reality.