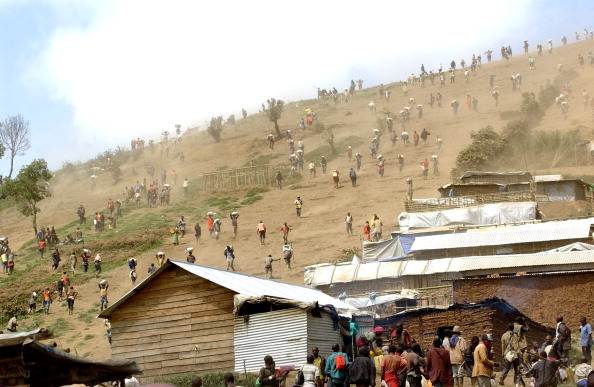 People carry bags of cassiterite (tin ore), coltan, which is used in mobile telephones and computers, and manganese down a hill from the Mudere mine near Rubaya (Photo Credit: Junior D. Kannah/AFP/Getty Images).

By Audrey Gaughran, Director of Global Issues at Amnesty International

I have just left Katanga in eastern Democratic Republic of the Congo (DRC), where my colleague Lisa Tassi and I were following up on Amnesty International’s work on mining and human rights in the region.

In some ways this is easy to do. Besides mining – mostly of copper and cobalt – little else happens in southern Katanga. But two very different methods are employed to extract these minerals. Industrial mining, involving large multinational companies, is managed from air-conditioned offices and carried out with heavy equipment; small-scale artisanal mining is frequently done in sweltering heat by men (and in some cases boys under the age of 18) working with basic tools.

Because they must survive, they have no choice but to accept these unfair terms of business.

”
Artisanal mining can be a desperate business. On top of suffering harsh work conditions, many creuseurs – meaning “diggers,” as the miners are known locally – are ruthlessly exploited by traders who buy from them along a largely opaque supply chain. In theory, the state has some oversight of the system, but the reality is quite different.

Earlier this year Amnesty International published a report exposing the horrendous conditions at an artisanal mining site in Katanga called Tilwezembe. One of the things we tried to unravel on our return visit is where minerals from sites such as Tilwezembe actually end up. Traders are key to that process.

But the supply chain to take the minerals mined by creuseurs out of Katanga is complex. It operates with virtually no oversight, and no meaningful paper trail to enable minerals to be tracked from source to export.

Katanga’s mineral traders include individuals who buy and sell as well as separate trading companies, some of which also process ore. In some cases, creuseurs work at mine sites controlled by these trading companies. The state (or the state mining company, Gécamines) gives these companies control, but seems to impose few safeguards. And so the creuseurs working the site – often through a deal between the trader and an artisanal mining cooperative – are obliged to sell directly to the trading company, with no system in place to ensure they get a fair price.

Creuseurs, who may work underground for many hours each day, regularly report that they feel cheated by this system where they have to take what they are offered with no way to challenge the traders. Because they must survive, they have no choice but to accept these unfair terms of business. There is also very little done to ensure safety at the artisanal mine sites, and every year scores of creuseurs are killed or seriously injured. Although SAESSCAM – the government agency charged with training and assisting artisanal miners – is generally present at these sites, it has insufficient resources and limited power.

We have been trying this last week to find out what happens to the copper and cobalt that is mined in such terrible conditions. Much of it goes to China, but who buys it and can we talk to them?

The answer is no, because Katanga’s byzantine trading pipeline makes it almost impossible to track ore as it changes hands from an artisanal mine site to a trader to a processor and on to export, let alone track it to the final destination.

In Kolwezi, a center for much of the copper and cobalt trade, we visited a depot where dozens of traders (Congolese and foreign) buy from creuseurs who arrive with sacks of minerals on bikes. Some of the creuseurs tell us that no questions are asked here – they bring, they sell; no one who buys from them knows where the ore comes from. They do not, themselves, have any way to measure the concentration of the ore they have mined. And so they accept the price. But they tell us that here, at least, they are free to offer their ore to a range of traders and sell to the highest bidder.

By contrast, creuseurs working on sites controlled by trading companies face a monopoly. One man we met at the Kolwezi depot told us he worked on a site controlled by a trader and had smuggled out some ore to sell at the depot, as the price on site was too little for the hours of work and he felt he was not getting a fair deal.

Traders sell to others inside Katanga where the ore is processed (or not) before being sent out of the country, often by the truckload across the Zambian border. Export paperwork gets filled out and filed, but by this stage in the process, the origin of the minerals has already been obscured. 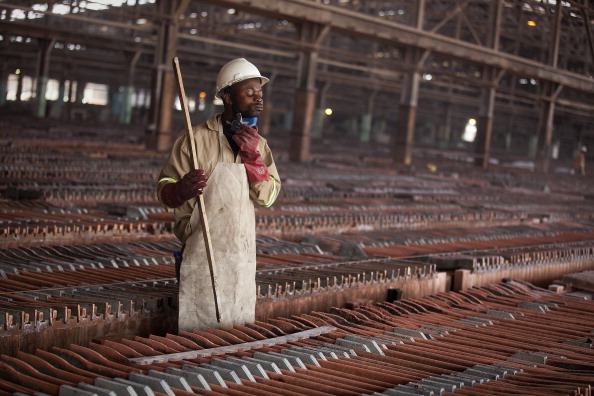 A worker adjusts his breathing mask as he handles copper sheets during electrolytic refining at Katanga Mining Ltd.’s copper and cobalt mine in Kolwezi (Photo Credit: Simon Dawson/Bloomberg via Getty Images).

The life of a creuseur is harsh. The Congolese authorities can – and must – do more to protect people from exploitative and harmful working conditions.

Key questions need to be asked and information verified. However, this kind of due diligence is impossible if there is no proper recording and oversight, and if traders can buy and export without anyone being able to tell if the minerals are extracted in appalling conditions.

In other parts of the DRC, including the Kivus, Maniema and northern Katanga, a system has been put in place for tracing tin, tantalum, tungsten and gold, and building documentation. If it can be done in these areas, then why not extend the program to Katanga’s cobalt and copper sector?

Efforts to ensure fair work conditions for creuseurs have to take account of the fact that there is practically no other livelihood on offer to many Katanga residents. The answer is not to prevent artisanal mining, but to make it a safer and fairer business until longer-term solutions are found.

4 thoughts on “Inside the DRC’s Artisanal Mining Industry”