When individuals successfully flee Eritrea, their family members may be arrested in their stead.

With no independent judiciary in Eritrea, detention is often indefinite, and there is no official accounting for the fate of those swept up by the government’s crushing repression of dissent and non-conformity. Family members of those arrested have themselves been detained for simply asking questions about the fate of their loved ones. The use of torture – in both interrogation and used as punishment – is common. Followers of banned religions are tortured to force a recanting of their faith.

Mapping ‘Widespread’ and ‘Systematic’
The scale and scope of the atrocities that characterize 20 years of Eritrea’s independence require infrastructure; the machinery of torture, arbitrary detention, indefinite incommunicado detention, and “disappearances” require investment, and deliberate design.

The widespread nature of repression in Eritrea requires an extensive network of detention. Civilian prisons, military camps, and security service stations are all used to detain prisoners for long periods of time. Some are well-known facilities; many are part of a secret network of detention throughout the country. Those detained in this systematized and overcrowded infrastructure of repression may find themselves languishing in metal shipping containers, in make-shift or tiny underground cells, and in isolation with no sanitation.

We couldn’t lie down [in the underground cell]. It’s best to be standing because if you lie down, your skin remains stuck to the floor. The floor is terribly hot. – former detainee in an underground cell in Wi’a military camp

Detainees are known to be forced into hard labor—including in Mai Edaga, Wi’a, and Alla camps—and forced into construction work outside of camps, such as on Dahlak Kebir Island.

The human rights tragedy that has gripped Eritrea for the entirety of its independence is of the gravest order; the deliberate investment by the Eritrean government into the widespread and systematic repression that characterizes both public and private life in the country is rivaled only by its efforts to control information about the appalling scale of repression and abuse. With information tightly controlled through fear, intimidation, and surveillance, and with no account of those detained, the exact number of those detained, tortured, and disappeared is impossible to determine. Even knowing the exact number or location of sites where thousands of Eritreans are held incommunicado is difficult. 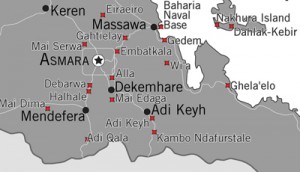 Click to see the full map of the extensive network of detention facilities in Eritrea.

What is certain, based on testimony from defectors and asylum seekers, is that the repression described in Amnesty International’s recent briefing on the situation is widespread. By mapping just a sample of the suspected detention centers in Eritrea that form the backbone of the regime’s repression, one gets a glimpse of not only the widespread nature of detention in Eritrea, but the systematization of detention without charge or trial, and the associated human rights abuses such as torture and disappearance.

Abuse Inside and Out
Among those targeted for detention and torture are those who attempt to flee the country. Those who have been caught attempting to flee Eritrea have been tortured to extract information about anyone who may have assisted, as well as punishment for the “act of criticism” by attempting to seek asylum. Reprehensible and illegal treatment of Eritreans with an (obviously) well-founded fear of persecution extends beyond the borders of Eritrea and its engineered machinery of repression. Many refugees – predominately Eritrean – face kidnapping and human trafficking by criminal networks, especially in the Sinai.

Many more who have successfully fled Eritrea face discriminatory treatment and denial of access to asylum, most notably in Israel. In Israel, there have been troubling reports of imprisoned Eritrean refugees being coerced into “voluntarily” returning to Eritrea. Noteworthy, the United States recently reported on Israel’s discriminatory treatment of Eritrean and Sudanese refugees – who constitute 85% of all asylum seekers in the country – in its annual report on human rights practices by other countries.

It is unlikely that many Eritreans who are seeking asylum are anxious to voluntarily return to the country. As the process of requesting asylum in another country requires testifying to the persecution an asylum-seeker fears, those returned to Eritrea have been forced, under torture and threat of torture, to confess to treason for falsely claiming persecution in asylum applications or “discrediting” Eritrea.

[The] thousands of arrests are illustrative of an absolute intolerance of dissent on the part of the government and President Isaias Afewerki – dissent in the form of actual or suspected criticism of the government – including discussions of reform and human rights issues; but also dissent in the form of anyone who does not comply with the restrictive system imposed by the state – including restrictions on freedom of religion and the requirement of indefinite national service conscription, or anyone who rejects the system by trying to flee the country.

As the 20th anniversary of Eritrea’s independence approaches join Amnesty in its efforts to expose the human rights catastrophe that has been independent Eritrea’s history to date, and work to reaffirm the hope and celebration on May 24, 1993.

PS: A big thank you to Rosemary Wardley for the static map of suspected detention facilities in our new report!

One thought on “Eritrea’s Independence: 20 Years of Brutal Repression”