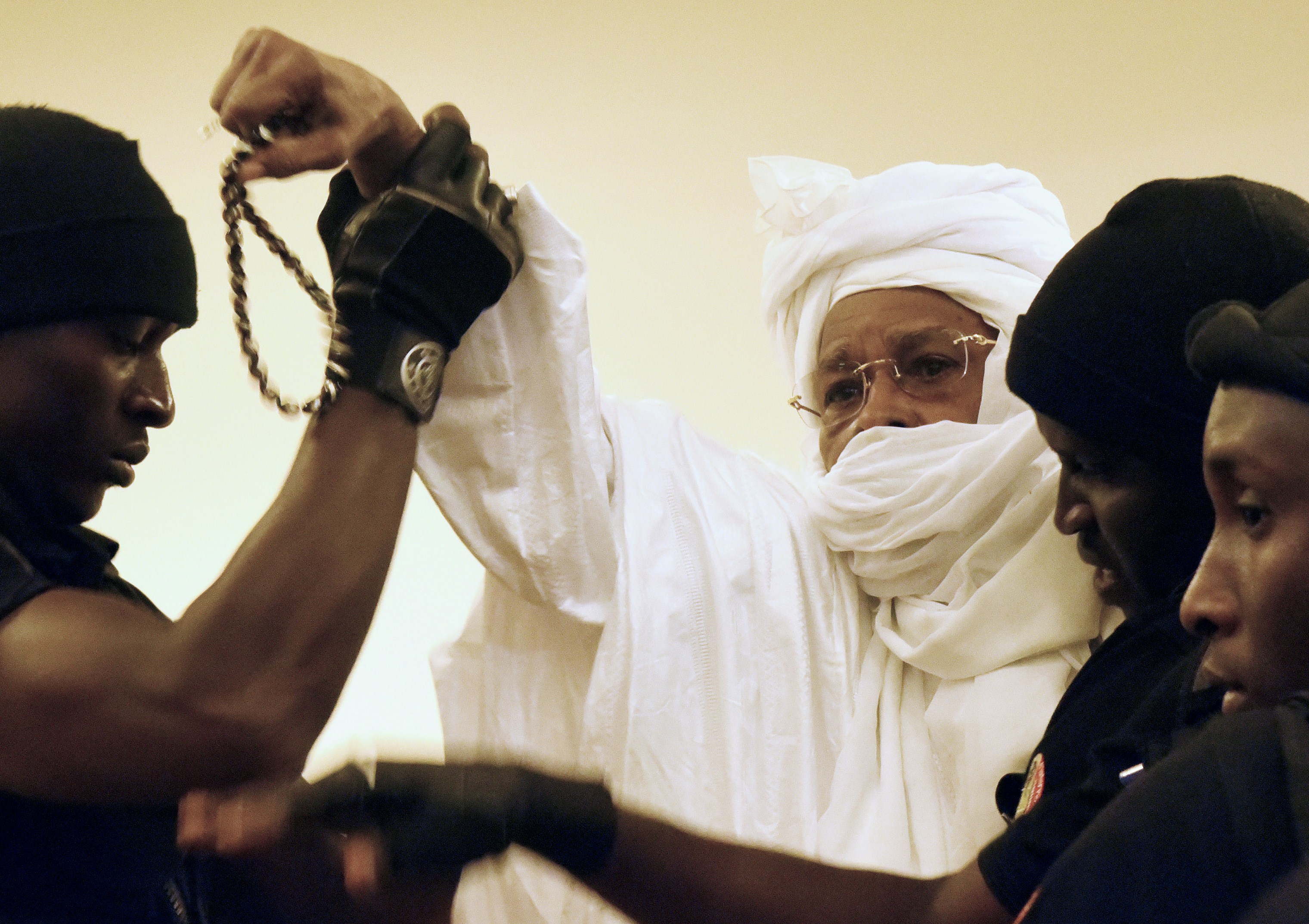 Former Chadian dictator Hissene Habre is escorted by prison guards into the courtroom for the first proceedings of his trial by the Extraordinary African Chambers in Dakar on July 20, 2015. (SEYLLOU/AFP/Getty Images)

By Sarah Milburn and Gladys Melo-Pinzon

Something remarkable began in Senegal on Monday a week ago. An African court in one country is trying the former head of state of another country, bringing badly-needed support to the continent’s formal human rights commitments and to the principle that no one – not even heads of state – should be above the law.

Hissène Habré, former head of state of Chad from 1982 to 1990, is on trial before the Extraordinary African Chambers in Dakar, Senegal. The charges include crimes against humanity, torture, and war crimes. A National Commission of Inquiry estimated that perhaps as many as 40,000 people died at the hands of Habré’s security forces during his tenure. The exact number may never be known because of how many deaths resulted from forced “disappearances” in government custody. The range, numbers and intensity of Habré’s cruelties against his own people are truly chilling.

Amnesty International issued research report after report documenting the varieties of torture used under Habre’s regime. by the including electric shocks to all parts of the body, repeated rape, repeated severe beatings, deaths in custody, disappearances in custody, tying, standing and hanging positions which crippled those held in them for lengthy periods, years of detention without charge or trial, denial of sanitary food and water, denial of medical care and the right to legal counsel, denial of the right to see family members, repeated threats of death and torture against prisoners and family members, and the torture of family members in the presence of prisoners.

As longtime Amnesty researcher Gaetan Mootoo says in a recent blog, “One such method includes a technique called ‘arbatachar,’ where the victim’s arms are tied behind his or her back at elbow level, pushing the torso forward, and then the feet and the arms are also tied together. One detainee was left in this contorted position for five excruciating hours.”

Habré’s military regime governed by force and by fear. It was toppled in 1990 by a military coup d’état led by the current head of state, President Idris Déby Itno, whose government has proven to be as prone to violence, threats, ethnic favoritism, use of torture, and other severe human rights violations as his predecessor. Exiling Habré and many of his followers removed a rival for power, but also created an opposition in exile causing continuing insecurity for the Déby regime.

Déby’s utterly cynical support for trying Habré has nothing to do with showing himself to be a supporter of the human rights violated by his predecessor, and everything to do with suppressing a continuing political rival. Former President Habré was given asylum in Senegal where he lived comfortably, never displaying any sign of remorse and arrogantly dismissive of all efforts to bring him to trial.

The trial itself, while a moral necessity and a forum for justice for Habré’s thousands of victims, has provided an opportunity for more political theater. Habré has always maintained that he is a political martyr. By being forcibly compelled to enter the courtroom, by refusing to speak to emphasize his refusal to recognize the court’s jurisdiction, and by his defense team’s insulting failure to show up, he demonstrates his complete contempt for the proceedings of this African court and “plays to the gallery” of his supporters. His behavior is a continued tactic intended to diminish the courage and stature of those key survivors and witnesses who will speak against him.

The successful long-term effort to bring him to court was the result of the patience and persistence of these survivors, efforts by Chadian, regional and international human rights groups, and key institutions meeting their obligations under international law to hold perpetrators of human rights abuses accountable. It has taken a quarter of a century to make Habré and his government answer for what they did. In 1990, after the coup at the start of President Déby’s new and supposedly reformist government, Chad’s “Commission of Inquiry into the Crimes and Misappropriations Committed by Ex-President Habré, his accomplices and/or accessories” issued a critical report documenting the abuses of Habré’s government. While this was a useful political boost for Déby, no action was taken, perhaps because it soon became obvious that President Déby was as much in favor of governing by fear as his predecessor. Over two decades later, in August 2012, the International Court of Justice, Senegal and the African Union agreed to establish the Extraordinary African Chambers, a new court specifically charged to look into the crimes committed under the Habré regime.

For 25 years, truth, justice and reparations have been unavailable to the survivors of Habré’s regime. Justice is a human right. The quest for justice in Chad – and on every continent – will continue as long as victims of human rights violations have their right to justice denied. The memories of the serious human rights violations committed by this one regime remain vivid and the thirst for justice is intact. Habré was a contemporary of many other leaders who never faced a court of law for their crimes, and this trial highlights if anything the injustice of leaving so many other leaders unaccountable for how their security forces treated their people. Mobutu Sese Seko died in his bed. The Central African Republic’s military leader (and briefly Emperor), Jean-Bédel Bokassa was allowed to return from exile, 7 years after his ouster in 1979. Like Habré, President Idriss Déby Itno continues to get support from the United States and France as a military leader while repression under his rule continues in Chad. Impunity must end. Chadians deserve justice. The broad-scale brutality of how Chadians lived under Habré cannot remain unpunished. If true justice is to be done in Senegal, this trial must take place despite Habré’s defiance towards the Extraordinary African Chambers, the African Union, and his accusers.

Social solidarity and national reconciliation must be sought in light of the requirements of historical truth. A community, a country, a continent, a nation, a people exists in shared memory. What will the Chadian people remember about the chronic condition of state impunity suffered by their country? What is or is not done will define who Chadians, and indeed all human beings, are. In this respect, the international community shares the responsibility to ensure justice is carried out.

Chad still struggles with the legacy of years of abuses and impunity under Habré, and further serious human rights violations during the Déby years. The trial of Habré, while both challenging and highly polarizing, would greatly assist efforts to reform and reconcile Chad’s divisions by breaking a long cycle of impunity and restoring the rule of law. This trial would mark one more step forward in the struggle to dismantle the entrenched impunity that has protected state perpetrators around the world who orchestrate crimes against humanity, govern by threat of retribution, and use brutal and systematic violations of human rights as if they were legitimate tools of government.

2 thoughts on “Chad and the Arc of Justice: The Trial of Hissène Habré”